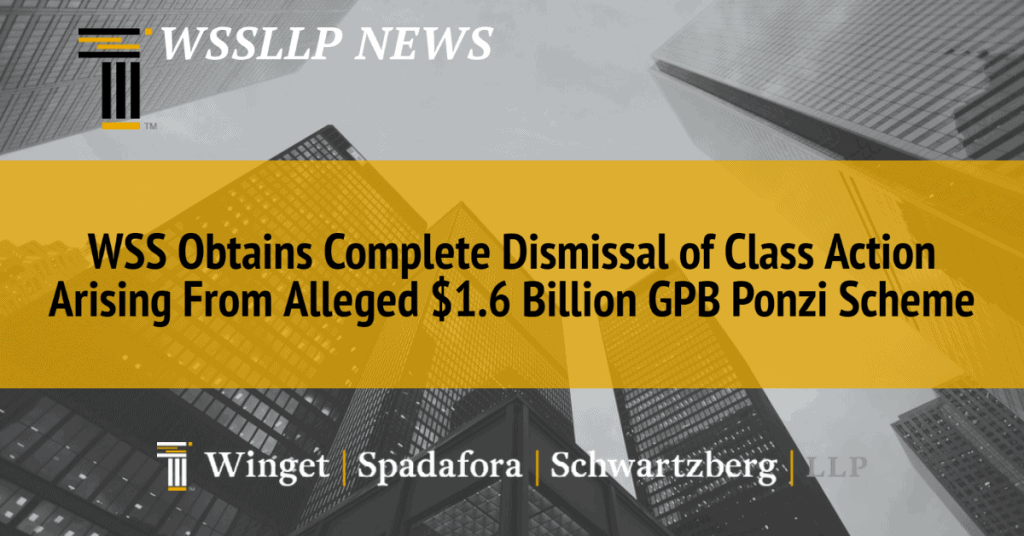 On December 14, 2020, Winget, Spadafora & Schwartzberg LLP’s New York office obtained the dismissal of all claims filed against its client in a securities fraud class action arising from the sale of securities totaling in excess of $1.6 billion.  The case was heard before the Hon. Lewis A. Kaplan, United States District Court Judge sitting in the United States District Court for the Southern District of New York, and captioned Barbara Deluca and Drew R. Naylor on behalf of themselves and other similarly situated limited partners v. GPB Automotive Portfolio, LP, et al. (19 civ. 10498 (LAK)).

The Plaintiffs in Deluca sought to represent a putative class of investors who purchased securities exempt from registration under Regulation D of the Securities Act of 1933.  Each of these investors purchased a fractional interest or “unit” in limited partnerships GPB Automotive Portfolio, LP and/or GPB Holdings II, LP (the “GPB Investments”). Starting in late 2018, the GPB Investments came under regulatory scrutiny for being an alleged Ponzi scheme and its investors have been impacted as a result.  Currently, there are a number of similar putative securities fraud class-actions pending across the United States.  The memorandum opinion in Deluca is the first written decision analyzing the Plaintiffs’ securities fraud allegations in the context of a motion to dismiss under the Federal Rules of Civil Procedure. A copy of the Court’s memorandum opinion may be found here.

The Deluca Complaint alleged, among other things, that the entire estimated $1.6 billion private securities offering was an elaborate Ponzi scheme due to the GPB Investments’ purported failure to adequately disclose that distributions to their limited partners included the return of investor capital as opposed to funds from operations.  The allegations of wrongful conduct were primarily drawn from citations and references to unresolved regulatory proceedings and internal disputes involving the GPB Investments’ general partner.  Plaintiffs sued a number of entities and individuals involved in the offerings, including our securities broker-dealer client, which was accused of marketing the GPB Investments to customers and acting as “underwriter” for their offerings.  WSS argued that the Complaint failed to comport with the heightened pleading requirements under the Federal Rules of Civil Procedure, as well as additional grounds addressed in the memorandum opinion.

The Court agreed and dismissed all claims against our client with prejudice, finding that the Complaint lacked non-conclusory allegations detailing our client’s participation in the alleged fraudulent scheme.  In that regard, the Court soundly rejected the Plaintiffs’ attempts to cherry-pick allegations drawn from other proceedings and repurpose them through the Complaint, holding as follows:  “[a] careful analysis of the complaint reveals that plaintiffs’ overarching claim that the sale of units in the GPB Investments was a Ponzi scheme is no more than an allusion propped up by conclusory allegations and claims improperly taken from other lawsuits.”  The Court further observed that a pleading which “’merely recites others’ allegations’ is generally insufficient under Rule 9(b) where it does not allege also non-conclusory facts to support its claim for relief … because ‘secondhand allegations’ quoted in a complaint are ‘in the nature of allegations ‘upon information and belief,’ which cannot ordinarily form the basis of a fraud claim ‘except as to matters peculiarly within the opposing party’s knowledge.'”

The memorandum opinion in Deluca reaffirms the principle that reliance upon unresolved regulatory scrutiny does not, by itself, establish a legally cognizable fraud claim.

The matter was handled by partners Michael Schwartzberg and Jessica Levine, and senior associate Alexander Truitt.